When You’re in a Bad Mood and He’s Not 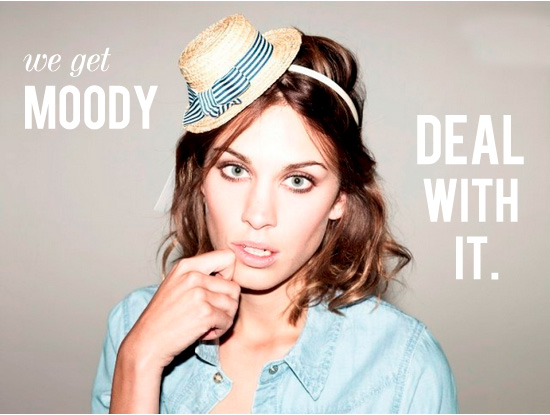 Being in “a mood” is one thing that guys just don’t get. And why should they? They don’t have estrogen controlling their emotions, making them want to cry for no reason, or telling them to force feed themselves chocolate when they’re not hungry. So when you’re in a bad mood, it’s not surprising that your boyfriend freezes up and doesn’t know what to do.

His first reaction? He thinks he did something wrong. Next? You say it’s not him, so then he just gets frustrated and doesn’t know what to do. Guys want to fix things. They want to “solve the problem”. We, on the other hand, just want to be allowed to be in a bad mood, cry while watching Carrie hit Big with a bouquet of roses, and move on. But when he wants to fix it, it makes you feel like you shouldn’t be in a bad mood, and then you feel even worse. It’s an evil cycle.

So now what do you do? Instead of turning a silly woman thing into a frustrating relationship obstacle, do this: talk about it when you’re both in a good, stable state of mind. Think about how you want him to react when you get that way, and just straight up tell him. If you want him to sit and snuggle you? Tell him that. If you just want him to leave you alone and focus on something else? Tell him that. How will he know what you want if you don’t tell him?

Yes, the first few times you get back into a bad mood, he’ll probably still piss you off. I mean, who wants someone to snuggle you just because you told them to? But it’s a work in progress. It’s like training a dog. The more and more you do it, the easier it will get and the more natural it will feel. Eventually, he’ll be sitting on the couch next to you asking you to pass the chocolate.

Why It’s Important to Know Your Love Language